Professional footballers in Canada are now affiliated to FIFPRO, as the world players’ union welcomes PFACan as a candidate member.

A little over a year ago, Marcel de Jong asked Dan Kruk if he could help establish a player association in Canada. National team player De Jong noticed during his first year in the newly established Canadian Premier League that player rights were not as well protected as in the three other countries he played professionally: The Netherlands, Germany and the United States. Together with Kruk, who has a history working for various trade unions, he started organizing the players through PFACan.

“It is absolutely astounding what we have achieved during the year since I sat down with Marcel,” Kruk told FIFPRO. “We have signed over 90 percent of the players and we expect that next season we will have almost one hundred percent of players.”

“I am proud of our board,” said De Jong, who acts as President. “We found players who are willing to stick their neck out and put their job on the line by going against the league and trying to deal with our problems. That is a big achievement.”

“Our players are not golden spoon athletes. They are not taking in hundreds of thousands of dollars a season,” said Kruk, who is Executive Director. “These are real working people. Over 50 percent of players are making less than 22,000 Canadian dollar a year. That is insane, that is minimum wage in many cases.” Minimum wages in Canada are regulated by the provinces. The lowest minimum wage is C$23,500 (in Saskatchewan), the highest is C$31,200 (Alberta). According to PFACan the living wage is roughly calculated around 25,000 dollar. “To be honest, I don’t know how some players get by.”

Arranging higher wages and establishing a minimum salary are two of the main issues that De Jong and Kruk are working on together with Legal Counsel Paul Champ. Other important topics are more freedom of movement and fairer arbitration. PFACan received complaints from various players who encountered difficulties moving to other teams. Players are “frozen out”: if they don’t resign with their team, then other teams also won’t sign them. “Clubs agree with each other which players they will or will not negotiate with. That is collusion,” Champ said. “It interferes with the player’s right to negotiate with any club.”

PFACan wants to change the arbitration system too, as all disputes now go to the League’s commissioner, who is not independent. Due to the Covid-19 crisis, all players had a 25 percent pay cut last year, which was directed by the League, even though some clubs had sufficient resources to pay their players and the federal government was providing a substantial wage subsidy. “If you want to claim that your club has breached your contract by unilaterally cutting your pay with 25%, then you have to bring that case to the commissioner who directed that pay cut. That is another example of the unfairness that players are facing.”

The main issue for PFACan is creating a working relationship the League, which until now has ignored all requests for meeting with the player association. “We want to give the players a voice and we want to be consulted on decisions that are important for the players,” Champ said. “We are really looking forward to negotiating the first collective agreement for footballers in Canada.”

“Together with the League, we can improve the Premier League and make it more attractive for players to play in our country,” De Jong said

Last but not least, PFACan aims to deepen its relationship with the Canadian Women’s National Soccer Team Players’ Association. “We want to work together with them under one umbrella,” Champ said. “They have experience and expertise about negotiating with the Canada football association. That knowledge and leadership will help us as an association, including negotiating a contract for the national men’s team.”

“We are creating the next generation of football leaders in this country. Some of these guys within our union are going to run clubs in the future,” said Kruk. “They will be part of the football eco-system and they will have a valuable empathy for the players’ conditions.” 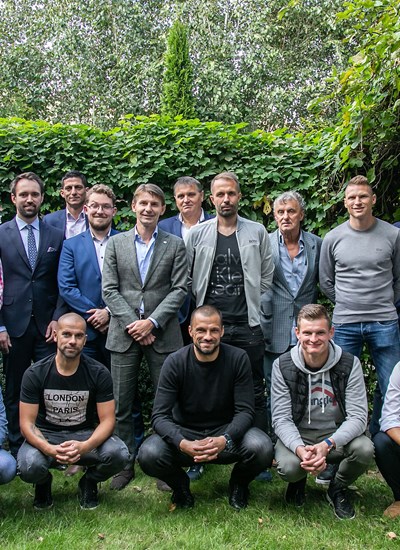