FIFPRO is campaigning to give medical staff ten minutes to decide if a player has a concussion because this brain injury can be difficult to immediately diagnose.

To enable this, a team could have an extra substitution, who would return to the bench if the player is not diagnosed with a concussion and can return to play.

Such an approach is used in other sports including rugby union and National Football League (NFL), sports in which there is a deeper knowledge about concussion.

We spoke to leading sports medic Bryan English, who has worked in football, athletics and tennis, and is a former member of the British Olympic Medical Committee.

English was Chelsea’s doctor when Petr Cech suffered a fractured skull in 2006, and currently works at Middlesbrough.

“Normally I know within 30 seconds if my player is not normal and I suspect a concussion,” English said. “If he says he is dizzy or staggers, if he can’t look me in the face or talk properly, then I don’t have to do any more assessment."

“For me at that point I have diagnosed a concussion. He cannot go back on. Then I do not need or want ten minutes to assess further."

“If I can’t decide within that 30 seconds, then I am concerned. Players recover quickly and will then say that they are fine and want to continue. Their coaches will say the same."

“But if I saw a level of a massive impact of which I thought ‘that can’t be right,’ then at least I would have the option to see the player in a quiet environment to check if he is normal or deteriorates."

“It would be great to have the flexibility of the ten-minute rule in certain circumstances.”

The International Football Association Board (IFAB), which makes the rules in professional football, is looking into ways of improving concussion protocol by changing rules.

Some stakeholders have raised concerns about possible sporting consequences of a concussion substitute, fearing teams might abuse the rule to get an extra substitute.

English said that should not get in the way of protecting the health of players.

“Let’s face it, there is the possibility that after 80 minutes someone might speak with a player to tell another player to go down with a head injury to get a fresh pair of legs on,” he said.

“But we cannot put a player’s health at risk because someone may wish to manipulate the situation.”

“IFAB together with national federations and football leagues, needs to question whether the priority is the game or the players’ welfare.”

If there is a rule change, the decision to use a concussion substitute should be in the hands of medics, English said. “We are here to protect players’ lives,” he said.

English is aware that coaches have tried to influence team doctors to keep a player on the pitch, even intimidating them to change their decision. “I have said to doctors, if that is the case you have to dismiss the coach’s opinion. You have to look after the player first and foremost.”

“Making a decision on the pitch is a high pressure situation. I know that these moments are not easy but the doctor has to do what is right medically. No matter what decision you make as a doctor someone will be unhappy and probably voice that opinion to the media.”

“I have seen cases where doctors leave a player carry on because maybe they lack the courage to confront the manager that the player has to come off.”

“If you take the player off and he recovers and is fine, but you lose the game, then the doctor will only get criticised by the player, the manager and the directors. In those situations the ten-minute rule may also help as long as the assessment can be done in private.”

“That is why education is so important. It is not just the doctors, but managers, coaches and players all have to buy into this decision making. We are dealing with a complex, traumatic brain injury.”

Do you want to know more? 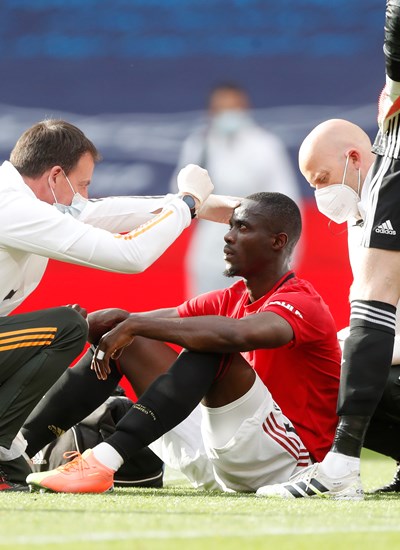 Concussion: why goalkeeper Joey Didulica had to retire early

How a concussion changed Erin’s life